Artwork by Per Kirkeby at Contemporary Art & Design

"Ghosts" by Per Kirkeby

When Per Kirkeby passed away in May 2018, at the age of 79, he left behind a fantastic legacy of paintings, sculptures in brick or bronze, graphic art, drawings, texts and video works. Kirkeby was an incredibly creative and brave artist. He is considered Denmark’s most prominent artist of the 20th century and holds an indisputable place within international art history as one of the most important painters and sculptors in Europe. Early on in his career he veered towards pop art, but later progressed into a more abstract expressionist painting style. In the 1960s his performance art associated him with famous Fluxus artists such as Joseph Beuys and Nam June Paik. His big breakthrough came in 1978 when Kirkeby participated in the Venice Biennale and his work caught the attention of an international audience.

In his youth he had studied geology and his interest in that subject is visible in all of his artistic modes of expression. He found his motifs in the landscape and in nature. The paintings all share a strong structure; forceful brushstrokes, layer upon layer of forms and lines coming together to create their own topography. Kirkeby’s brick sculptures have a direct connection to the Danish soil. Using burnt clay he created large spatial installations on the border between sculpture and architecture. A great example of this is the sculpture ‘Wanås’, created for the Wanås Konst sculpture park in 1994. The smaller sculptures he kneaded out of clay himself, the traces of his fingers still visible in the heavy bronze casts.

During Kirkeby’s five decade long artistic career he has been exhibited at well-known institutions such as the Tate Modern in London, Museum Kunstpalats in Düsseldorf, at the Louisiana Museum of Modern Art outside Copenhagen, as well as in numerous galleries around the world. 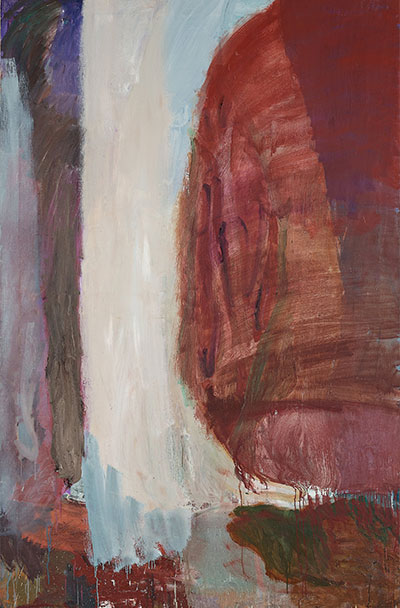