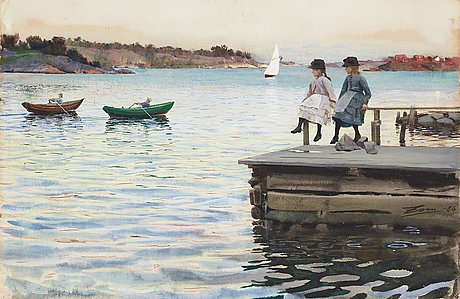 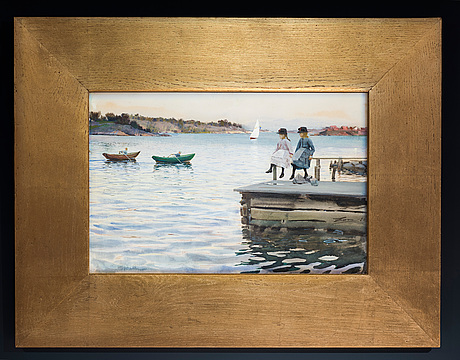 "Boat Race" is undoubtedly one of the absolute masterpieces within the entire ouevre of Zorn as a painter of watercolours.

The motif was painted in the fashionable seaside resort of Dalarö outside Stockholm.
After having lived in London between 1882 and 1885, Zorn returned home in June of that year to wed Emma Lamm. On October 16, the couple was married in a civil ceremony in Stockholm City Hall.

The Zorns honeymooned in Constantinople (now Istanbul), Turkey, then as now a cosmopolitan metropolis between the East and the West. In "Anders Zorn: Sweden's Master Painter" (exhibition catalogue, the Legion of Honor, San Francisco and the National Academy Museum, New York, 2013-2014) professor Johan Cederlund (director of the Zornsamlingarna [Zorn Collections] in the artist's hometown of Mora, Sweden) writes:

"There [in Constantinople] Zorn painted the 'Caique Oarsman', his most famous picture of the city. Other artists at that time depicted the exotic foreigness of what they saw, but Zorn was drawn to the rowers and the boats on the Bosporus River, the water, and the shimmering atmosphere over the city. He desired to capture the world just as it was, a world full of sensory impressions, and the path he took was completely his own".

In his autobiographical notes Zorn wrote:

"I never spent much time thinking about others' art. I felt that if I wanted to become something, then I had to go after nature with all my interest and energy, seek what I loved about it, and desire to steal its secret and beauty. I was entitled to become as great as anyone else, and in that branch of art so commanded by me, watercolour painting, I considered myself to have already surpassed all predecessors and contemporaries".

As director Cederlund subtly puts it: "Self-confidence was not an issue with Zorn".

The couple usually spent their summers on Dalarö, in Stockholm's archipelago, where Emma's mother rented a small house and the summer of 1886 was no exception. Director Cederlund, again, writes:

"Zorn portrayed in watercolors the carefree days of the seasonal guests at the fashionable seaside resort. Their first summer as newlyweds, in 1886, resulted in some of his most exquisite pictures in this setting, such as the idyllic 'Summer Vacation', showing a woman (Emma) on a jetty and a man in a rowboat below. Zorn's watercolors from Dalarö are formidable showpieces in the depiction of water and its continual movement. The sea became a recurring motif in his work, not only the coves of Stockholm's archipelago but also the coastlines of North Africa and Spain, the Bosporus, Venice's lagoon and the wild waves of the Atlantic".

"Boat Race" depicts the very same jetty (which still exists today) as is seen in the above mentioned "Summer Vacation" (which set an auction record for the artist in 2010 when it fetched a hammer price of SEK 26,000,000) from the same summer. Also recognizable from "Summer vacation" is the island called Korsholmen. In "Boat Race" however Zorn also added the island called Jutholmen (depicted in the background behind the girls).

The endearing scene captures four local children at play. The two girls on the jetty (sisters Ester and Thyra Dahlström) excitedly follow the boat race between their brother Teodor and their cousin Georg Engel.

More than just a conventional genre scene "Boat Race" is a picture in which Zorn demonstrates a masterly display of his technical abilities as a painter in watercolours. The rendering of light, conveying of atmosphere and the capturing of the continual movement of water and the effect on it from currents, winds and sunlight sets this watercolour apart as one of the absolutely unsurpassed masterpieces by Zorn.

As Zorn himself put it:

"What seems now to have particularly attracted me was the play of the water and the reflections, to really get the movement, put the ripples and everything in perspective and scientifically explain it all with meticulous sharpness".

Distinguished by its unparalleled beauty "Boat Race" is a work of crucial art historical importance.