No connection to server
We use cookies to provide the best possible customer experience. If you continue you accept this use of cookies. Go here to read more.
OK
Contemporary Art & Design 611 Stockholm333335
334
1062439 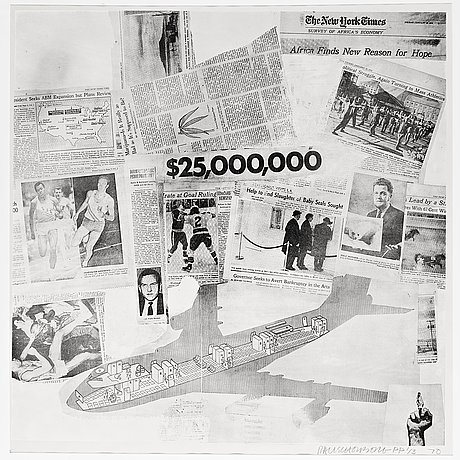 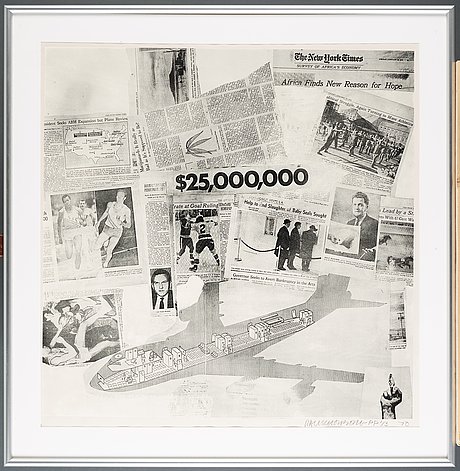 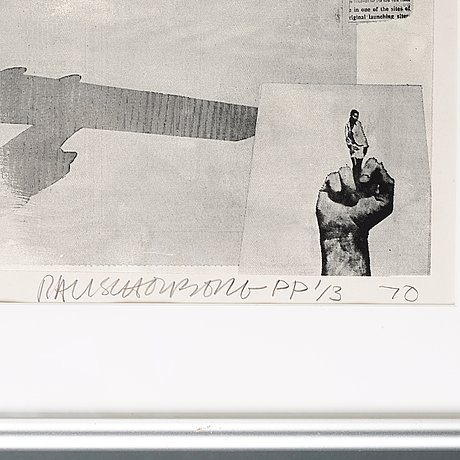 Galleri Futura, Stockholm, acquired by the current owner in the early 90's.

Rauschenberg's monumental work "Currents" includes 36 screen-prints of newspaper clippings, taken from eight American contemporary newspapers over two months. He created 36 motifs that formed two portfolios "Surface Series from Currents" och "Features from Currents". The then jointed all these to form a monumental print. The work measured a total of 182.9 x 1645.9 cm, in an edition of 6, and was often displayed wrapped round a corner for example at MoMa New York.

In the catalogue "Robert Rauschenberg" (2016) published for the grand retrospective at Tate Modern in London 2017 you will find the following paragraph regarding "Currents":

"Rauschenberg's experience of endowing printing with painting's scale was fundamental to his conception of the editioned screen-print 'Currents', a work he conceived in 1969 and published in 1970 at Styria Studio in Glendale, California. The work reproduces a series of thirty-six collages, Studies for 'Currents' (1970), each of which comprises headlines, texts, and photographs that Rauschenberg gathered from eight contemporary U.S. newspapers over a period of two months. Of his decision to use multiple newspapers simultaneously he explained, 'One reads a newspape, absorbs the information no matter how disorienting, distressing or inflammatory it might be. When reading five or six papers with the constant repetition of items, the devastating news has a serious impact and it can not be ignored.' The impact of the work's content was heightened through 'Currents' physical manifestation: it was printed on a single sheet of paper measuring six by fifty-four feet. Once again Rauschenberg had broken a record, making the largest-known printed work at the time. Because of its size, 'Currents' typically wraps around the corner of a room, enveloping the spectator in a collage of imagery about race relations, the Vietnam War, environmental challenges, and other political issues with which Rauschenberg was concerned,"
Quote p. 364.