No connection to server
We use cookies to provide the best possible customer experience. If you continue you accept this use of cookies. Go here to read more.
OK
Important Spring Sale 633 Stockholm663665
664
1306522 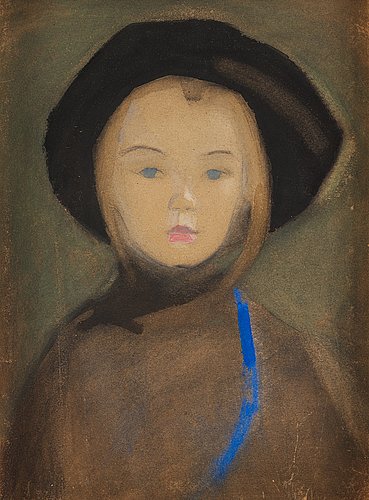 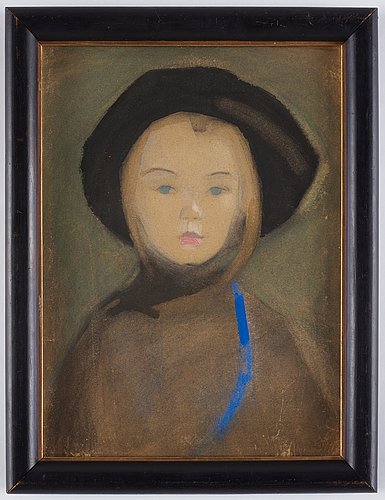 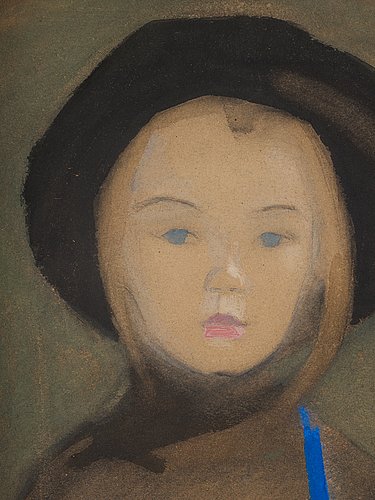 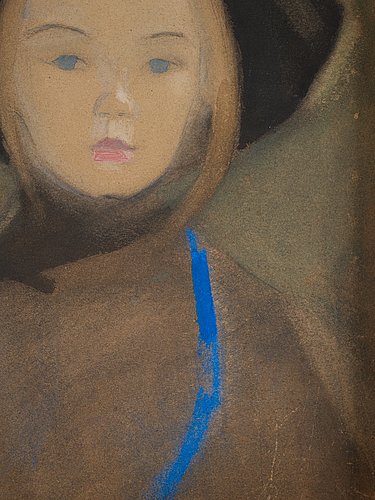 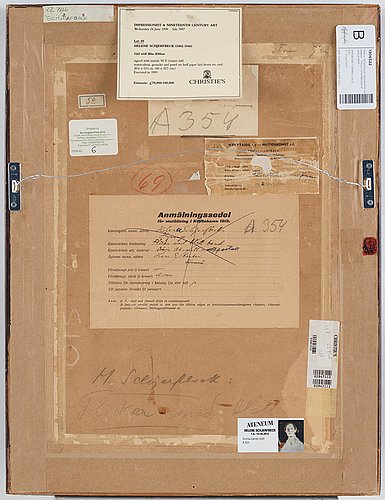 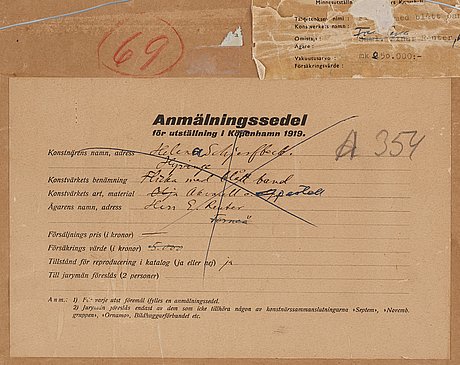 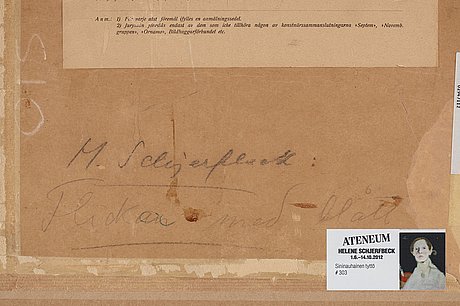 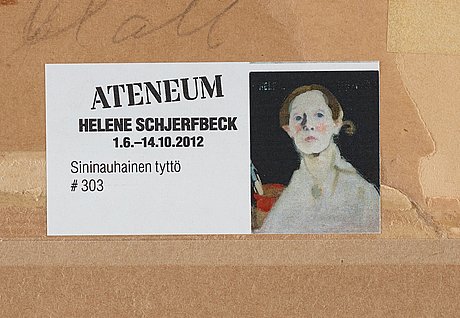 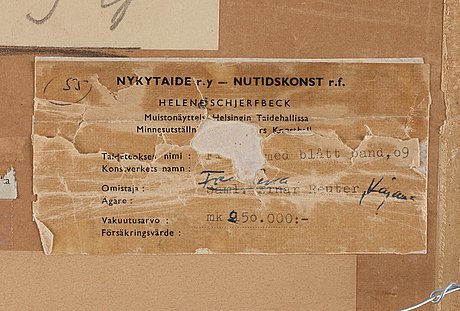 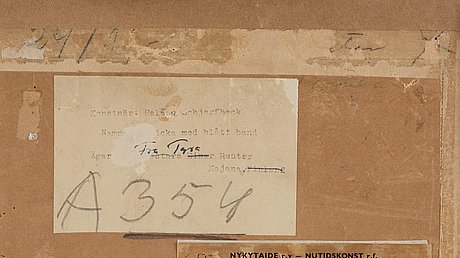 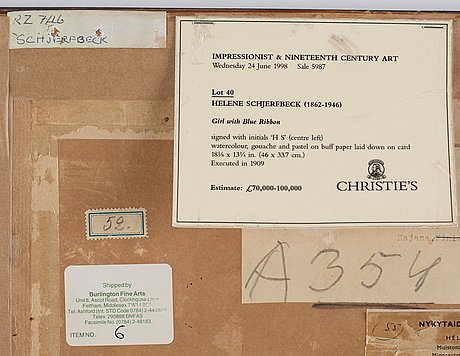 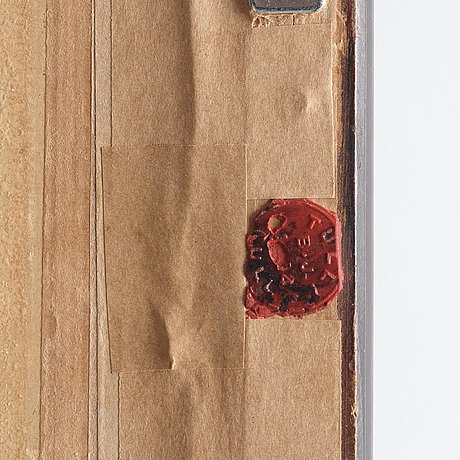 In 1902 Helene Schjerfbeck moved to the small village of Hyvinge, 50 kilometres north of Helsinki. For the next fifteen years Schjerfbeck completely avoided Helsinki. She did, however, continue to paint and would regularly send pieces for exhibitions and prize draws in both Helsinki and Turku. She also retained some contact with the outside world through her correspondence with friends and by subscribing to international art magazines. Her interest in the Old Masters, particularly Renaissance artists such as Cimabue and Fra Angelico, as well as the somewhat later El Greco, would come to play an increasingly significant role in her practice during this period of her artistic life.

Her models were found in her immediate environment and the isolation allowed Schjerfbeck to find her own trajectory. During the years in Hyvinge Schjerfbeck’s unique, simplified and highly focused imagery was developed in an explicitly modernist style. "Flicka med blått band" is a brilliant example of Schjerfbeck’s artistic strength during this very important transitional period. Einar Reuter writes the following words in his biography "Helena Schjerfbeck", published in Swedish in 1953, about the present lot:

"She had been thinking of using the little girl, Fanny, as a model a few years ago, and now she decides to paint the girl. In the 80s the girl would have been an excellent model with her slightly violet-looking pallor and her mealy complexion. Now Helena would have preferred her model a little differently, but when Fanny finally arrives, she feels her heart warm to her. This is just the little creature that she would like to paint, to get close to for a few fleeting moments. She thinks that it is only in a watercolour that she can capture the fragility of her being. She again paints in grey and brown, allows the paper to become the colour of her skin, only adding a thin, bluish grey shade and a little white on the nose and the upper lip, ochre in the flowing wisps of hair. Yet the painting still does not seem colourful enough so Helena takes a deep green pastel colour that she rubs into the background. This makes the painting more saturated, gives it more depth. She takes gouache and in one go paints the wide-brimmed hat in black. She adds a little blue to the dress, but it does not seem to work, and she has to ‘wash’ it away. Instead she draws a shimmering blue band from the shoulder down to the chest – something in this model requires this blue. The work takes months. She turns the canvas against the wall when she’s not working on it, turning it again and again to look at it with rested eyes, to see what the image still needs, adding something new, changing a detail, rubbing it somewhere, softly and carefully. But what impact such a minute retouching can have on the whole! All her work serves only this one goal: to reproduce a glimpse of what she has seen in this child’s soul. The inner life, vibrating beneath the surface."

According to Reuter she held on to the work for some time before finally deciding to sell it: "She kept the painting for a long while, then she sells it to Kahlroth. It hangs at his place for years before anyone notices it". Whether Schjerfbeck felt a sense of absence or loss when the watercolour had left her is hard to say. What is well known, however, is the fact that she often returned, sometimes much later on, to her most successful compositions. In 1943 Schjerfbeck executed two responses to this motif: "Flicka med blått band" (oil on canvas, 47 x 34 cm, Athela 939, full-page colour illustration, p. 334 in [ed] Leena Ahtola-Moorhouse, "Helene Schjerfbeck 150 år", exhibition catalogue, Statens konstmuseum Ateneum, Helsinki, 2012, French private collection) and "Flicka med blått band" (charcoal, watercolour and gouache on paper, 47 x 34 cm, Ahtela 940, Collection Gösta & Bertha Stenman; thereafter in Collection Lars Schmidt & Ingrid Bergman; Christie’s, London, "Nordic Art", 15th May 2008; private collection).