No connection to server
We use cookies to provide the best possible customer experience. If you continue you accept this use of cookies. Go here to read more.
OK
Modern Art + Design 636 Stockholm471473
472
1327552 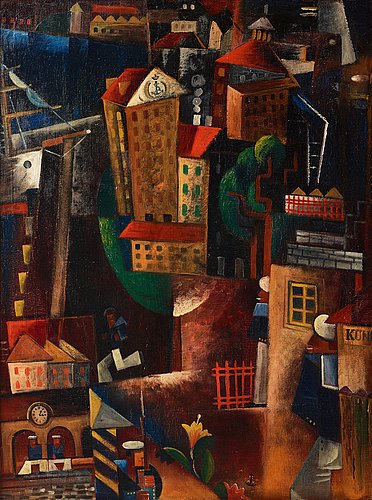 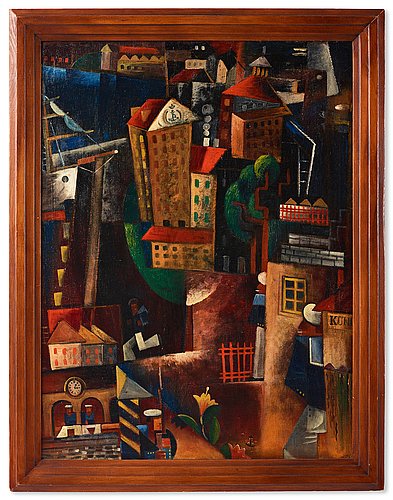 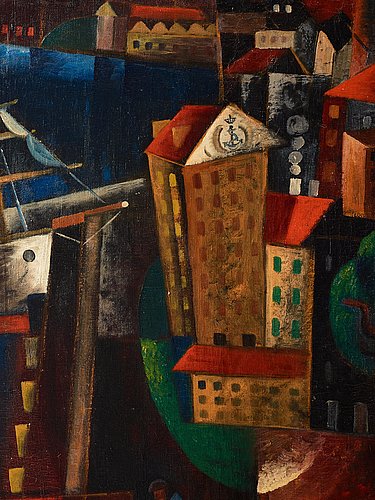 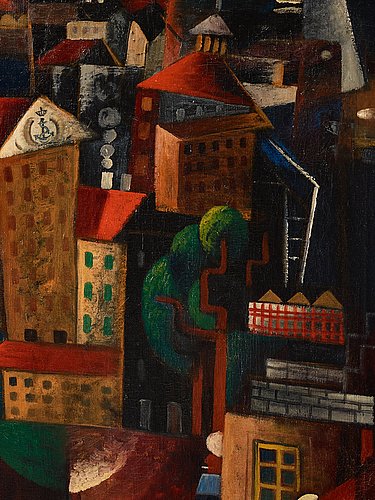 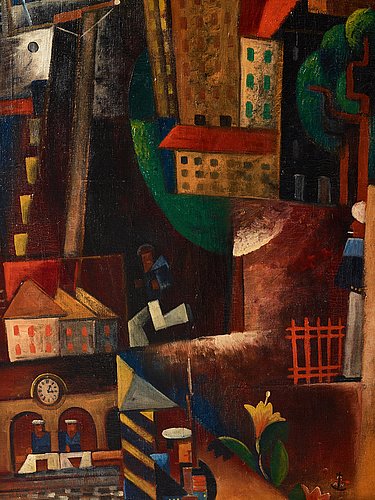 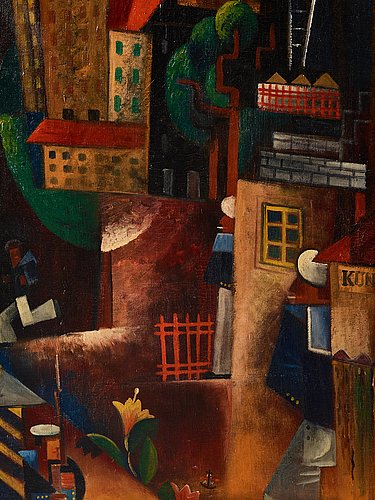 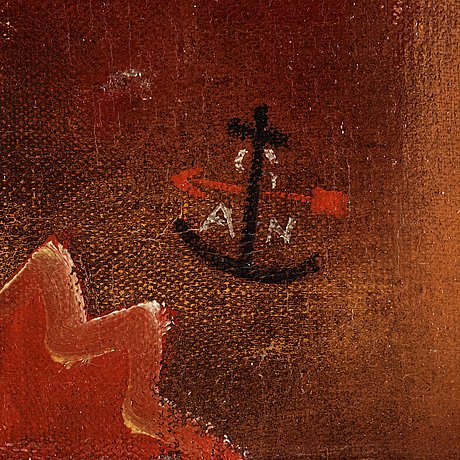 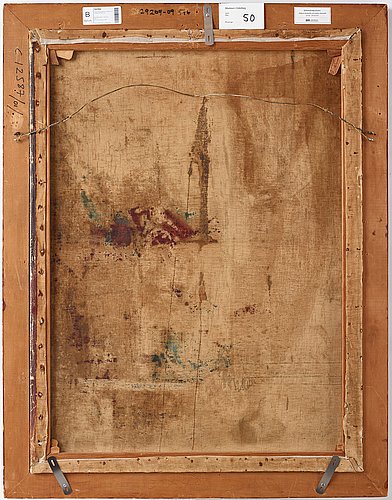 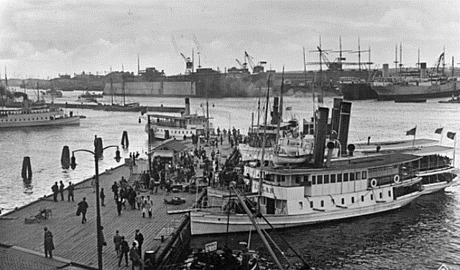 When ”Matroser i Göteborg” was included in Bukowskis' “Modern” auction 1990 (under the title “Hamnmotiv”) a substantial piece in the historical puzzle about GAN:s limited, but highly interesting production in Gothenburg 1919, was added. In 1990 five years had passed since Jan Torsten Ahlstrand published his monography “GAN. Gösta Adrian-Nilsson. Modernistpionjären från Lund 1884–1920”. Ahlstrand, who at the time didn’t know about the existence of “Matroser i Göteborg” mentioned in his book from 1985 “I allén oktoberkväll” (oil, 86.5 x 63 cm, 1919, Gävleborgs länsmuseum, Gävle) as “GAN:s most influential painting from the autumn months in Gothenburg, September – November 1919”.

In connection with the exhibition “Gösta Adrian-Nilsson. Sjömanskompositioner – färgens dramatik och stadens dynamik” at Sven-Harrys art museum in Stockholm in 2019, Ahlstrand could, however, in his last longer publication about the artistry of GAN, devote “Matroser i Göteborg” the space that the painting deserves. In the exhibition catalogue, Ahlstrand wrote: “The distinct Gothenburg influenced sailor painting is the significantly larger ‘Matroser i Göteborg’. It should also date from GAN:s first time in Gothenburg, when he lived with Zandén close to the harbour. The different areas connote well-known buildings in Gothenburg, like the tall naval officer school, customs house (currently Casino), Skansen Göta Lejon (or Kronan), Feskekörka, other houses and a part of the harbour with a tall crane and the prow of the sailing ship Viking and, last but not least, six sailors in navy coats, white hats and trousers. One of them stands with a raised bayonet by a sentry-box, two sits next to each other underneath the clock by the customs house, a fourth is running, and the two to the right stands with cigarettes in their mouths in front of a small building; a kind of shed, maybe a urinal (the one closest to us is gesturing in a way that would suggest so). All in all, it’s a painting that for GAN unusual fresh, clear and bright colours, that suggest a positive first meeting with ‘Swedens port to the West’. The kaleidoscopic breaking of the motif has been replaced with smaller, complete figures, combined like collages.

Sailors and city synthesis motifs were not a new addition to the pictorial world of GAN. During his incredible productive years in Stockholm (September 1916 – June 1919), he had explored these motifs in several impressive compositions. In this case, it’s close at hand to compare “Matroser i Göteborg” with the painting from earlier that year in Stockholm, “Skeppsholmen, vinter” (oil, 73 x 50 cm, 1919, Moderns museet, Stockholm). In both paintings, we find details in the shape of ships, small forts, bayonet clad rifles, paired sailors, crowned monograms and more. We can thus not exclude that GAN, in some instances, went back to the memories of the earlier composition. However, what is interesting is that the painting isn’t just one of a few from Gothenburg but also the most extensive and most elaborate composition. Ahlstrand gave the background to GAN:s short stay in Gothenburg during the autumn of 1919: “During the most of the autumn in 1919 GAN stayed in Gothenburg in a vain attempt to be accepted as a stowaway on a boat going to South America or the South Pacific – away from the European civilization. In December the year before, he had stopped by on his way to Halmstad to scout the west coast metropolis. His diary flooded with a rapt and graphic description of the large harbour with its ships, boatyards, cranes and all the sailors. His enthusiasm faded however soon – as often was the case with GAN. He had rented a room in September with an acquaintance, Erik Zandén, close to the harbour. At the beginning of October, his host moved to a ten-story house close to the railway, and GAN had to stow himself in the kitchen in the small apartment, where he felt cramped. But it was a good start. One day in the harbour, he saw a white flag with a black anchor and a transverse arrow in red. ‘This shall from now on be my signature!’, he wrote enthusiastically in this diary the 21st of September”.

GAN also noted an analysis in his diary that clarifies the anchor monogram real and meaning for the world unknown. The anchor traditionally symbolised “hope”, whereas the arrow, according to GAN, symbolised “pierced”: “In other words: My pierced hope. To live with a knife in the chest! Brrr!”. The note in the diary is significant as it fully expresses GAN:s feelings of hopelessness that autumn. His stay in Stockholm finished, and his connection with Edvin Andersson also. What remained for the despised and often criticised modernistic pioneer that gruesome autumn in Gothenburg was a futile hope to travel across the sea to far-away exotic countries.

This longing was probably increased when GAN, visiting the harbour, saw a ship with the alluring and exotic name Valparaiso. Soon after that, he painted two small, almost flat cubistic panels titled ‘Valparaiso’. In the first smaller and more abstract version (oil, 28 x 19 cm, 1919, privately owned), he has signed it with his earlier signature with the G in the shape of lightning. In the other, more dynamic version (oil, 49.5 x 29.5 cm, 1919, privately owned), it appears he has for the first time used his anchor signature, as mentioned in his diary, which came to be his favourite signature for the next 2–3 years, leading up to 1922 when he lived in Paris.
From the smaller paintings mentioned above, and with help from the research presented by Ahlstrand about GAN:s stay in Gothenburg 1919, we can assume that “Matroser i Göteborg” was executed in September/October that year. A lot speaks for the painting being the first big and elaborate composition in oil on canvas signed with the peculiar anchor monogram.