No connection to server
We use cookies to provide the best possible customer experience. If you continue you accept this use of cookies. Go here to read more.
OK
Modern Art + Design 636 Stockholm518520
519
1328231 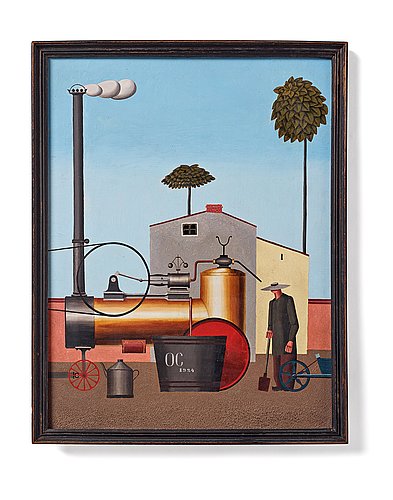 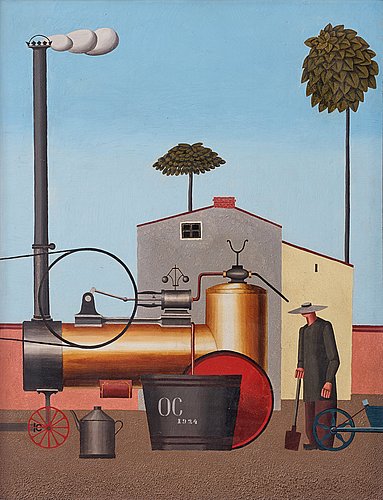 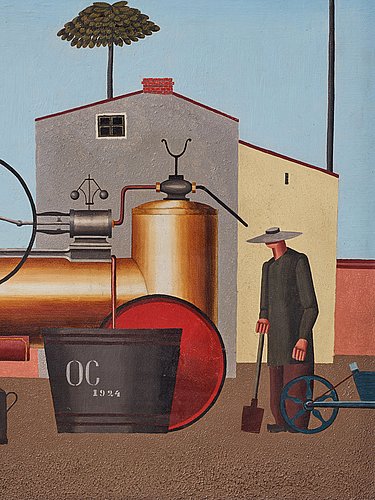 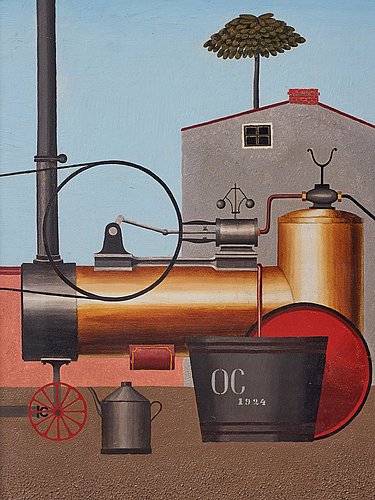 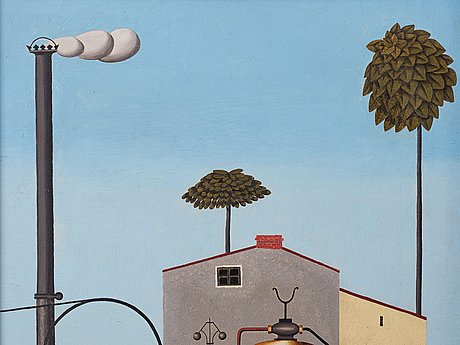 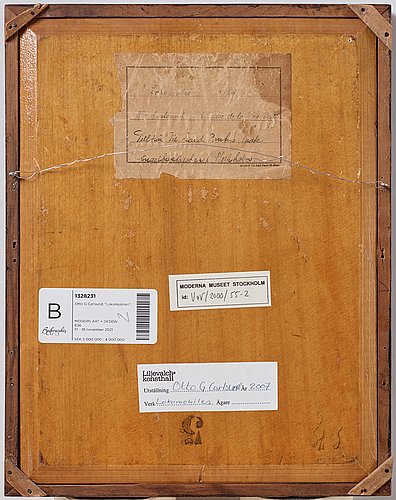 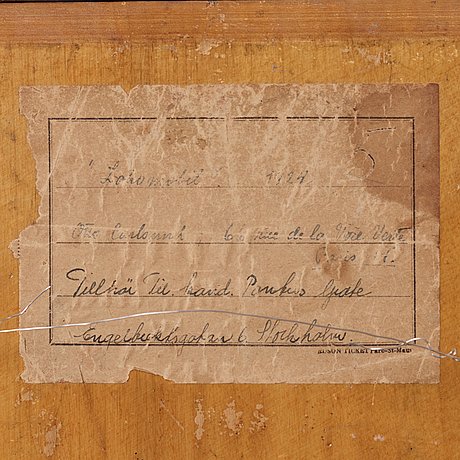 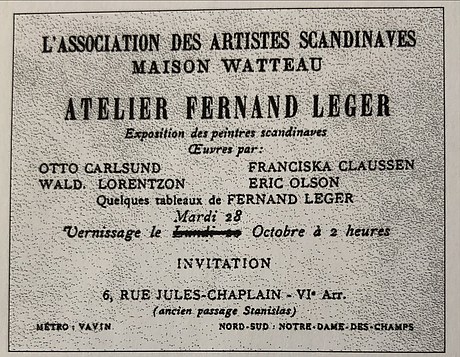 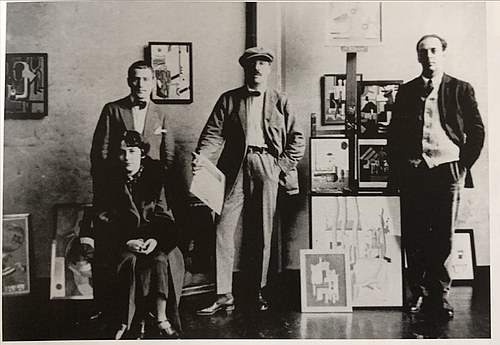 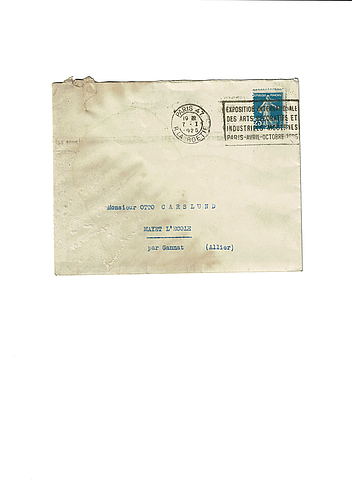 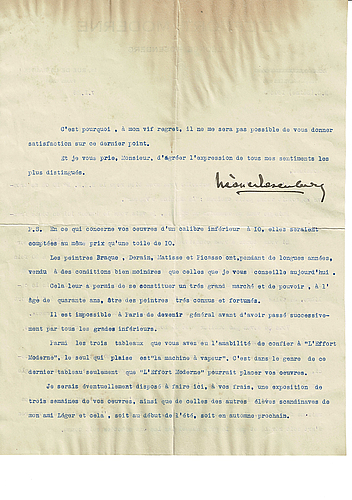 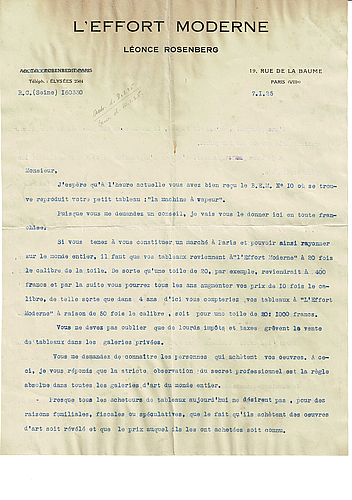 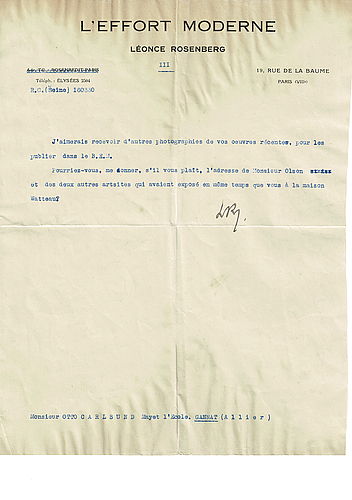 Otto G Carlsund was born in St. Petersburg, his father was a Swedish engineer, and his mother was French. In 1924 he came to Paris through his friend GAN and was introduced at the “Academie Moderne”. He spoke both Russian and French and was able to act as a mouthpiece between the students and Léger. Carlsund quickly gained a favoured position as he was talented and inspiring both as a painter and theorist. He became one of the founders together with Amédée Ozenfant for the new movement “Art Concret” and had some critically acclaimed exhibitions at the Swedish–owned gallery ‘Mots et Images’ in Paris.

Because it was expensive to live in Paris, Carlsund regularly went down to his grandmother in the village of Le Mayet-d’École in the Vichy area in France, where he also had a large part of his family on his mother’s side. Here Carlsund had set up his studio in one of the farmhouses where he could devote himself to painting. During one of these stays, Carlsund painted ‘Lokomobilen’, a true masterpiece and an icon in Swedish modernism.

“This is one of Carlsund’s many stylistic hybridizations of different isms. Here is Carpaccio’s renaissance style, crossed with Léger’s ‘tubism’. The two trees and the farmer in a straw hat are taken from the famous Italian, the assembly of circles and polished cylindrical shapes – and the three smoke puffs - characteristic compositional elements of Léger. The sublimated scenery is as follows: From the right comes the farmer with a loaded wheelbarrow and shovel. The steam engine’s power is transmitted by the drive wheel to the unit to the left outside the picture. The large lag vessel in the centre speaks for a winepress. As the photo shows from the hanging of Léger’s and the four Scandinavian students’ painting in October 1924 at Maison Watteau, Carlsund’s locomotive came to occupy a prominent place on the expo.” (Oscar Reutersvärd, Otto G. Carlsund - In remote perspective, Kaleidoscope publisher, 1988, page 22).

The Swedish culture house Maison Watteau, named after the 18th-century French painter Watteau who allegedly had his studio in the house, was located on Rue Jules Chaplin in Paris and played an essential role as a meeting place French art world in Montparnasse. The opening at Maison Watteau on October 8, 1924, was well attended, and there was great interest. Among other things, the well-known gallery owner Léonce Rosenberg paid special attention to Carlsund’s paintings.

Anders Wahlgren has chosen Lokomobilen as the cover of his new book about Carlsund and writes the following about the work: “The locomotive that Carlsund painted in Mayet was a tribute to the machine and perhaps to the relative Otto Edvard, who designed steam locomotives at Motala workshops. The shiny shape of the steam boiler, valves and pistons. Everything painted with a precision that came to be characteristic of Carlsund. Here he got a full outlet for his machine worship in a motif that provided great opportunities to refine the geometric shapes. From Léger, he had been taught to produce details in the machines and place shiny objects against the carpet, in the axles and gears. Even the man guarding the locomotive has a hat whose shape becomes central in the painting, like the wine barrel. He provides the black barrel with his signature OC. It will be an important graphic accent and part of the composition. ” (Anders Wahlgren, Otto Carlsund, Carlsson's book publisher, 2021, pages 74 - 75).

Anders Wahlgren was the exhibition commissioner for the exhibition about Otto G Carlsund at Liljevalchs Konsthall in Stockholm in 2007 when Lokomobilen was the work that visitors were met by in the form of a monumental banner on one of the outdoor walls at the entrance.
The work has never been for sale and has been owned by the same family since the 1920s.